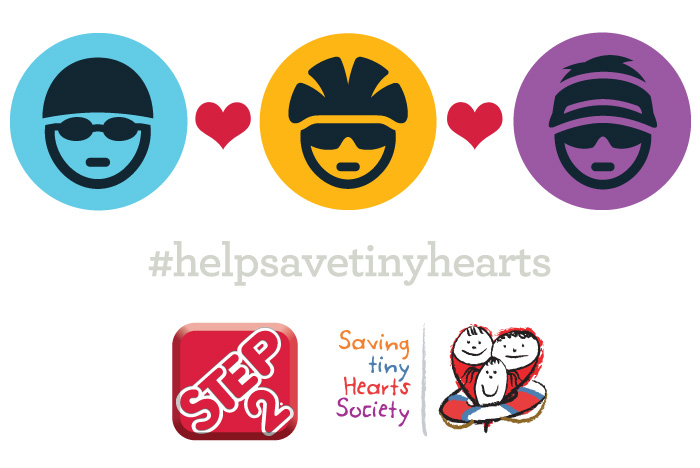 Over the past five years, Step2 has had the honor of partnering with the Saving tiny Hearts Society, whose mission is to raise seed money for grossly under-funded, lifesaving grass roots research of congenital heart defects (CHDs). Step2 has happily donated over $20,000 since we began our partnership. Now, we are asking for your help.

In 2011, Jonathon Reid’s son Gus born with a heart murmur. Upon further evaluations, Gus was diagnosed with mild to severe aortic valve stenosis (AVS).  At three months old Gus underwent a balloon valvoplasty procedure that greatly improved the condition of his aortic valve and has currently stabilized him in the mild/moderate range. Shockingly, had the murmur never been detected in the hospital, they would have never known there was an issue.

Such research to detect CHDs has been made possible by non-profits such as Saving tiny Hearts. To raise money for this grossly underfunded research, Jonathon is racing in the IRONMAN Triathalon on November 2nd. His goal is $5,000 and he has already raised $3,174. Let’s help him hit his goal! After all, he will be swimming 2.4 miles, biking 112 miles, and running a full marathon in honor of his son, and all children born with and those who will be born with CHDs.

Join us, @thestep2company, and @SavingtinyHeart Wednesday, October 30th, 2013 at 1PM ET for a 1-hour #helpsavetinyhearts twitter party to help Jonathon meet his goal.  Step2 will be giving away two Doodle Art Easels, a Handy Helper’s Workbench, an Easy Turn Coupe, and Glo Buddy Turtle Night Light during the party plus bonus prizes for every $250 risen for Jonathon’s race during the party!

#helpsavetinyhearts Twitter Party Sweepstakes Official Rules NO PURCHASE NECESSARY TO ENTER OR WIN. BY ENTERING THE SWEEPSTAKES, YOU (“ENTRANT” OR “YOU”) MUST AGREE TO THESE OFFICIAL RULES, WHICH CREATE A CONTRACT SO READ THEM CAREFULLY BEFORE ENTERING.

2. ELIGIBILITY:  Sweepstakes is open only to legal residents of the 48 contiguous United States, who have a Twitter account, and are eighteen (18) years of age or older at the time of entry. All employees of The Step2® Company, LLC (“Sponsor”), their respective parents, subsidiaries, affiliates, promotion and advertising agencies, and members of their immediate family (spouse, parent, children and siblings and their respective spouses, regardless of where they reside) and persons living in the same household, whether or not related, of such employees, are not eligible to enter or win. Void where prohibited by law. Sweepstakes is subject to all applicable federal, state and local laws. Entry in the Sweepstakes constitutes your full and unconditional acceptance of these Official Rules.  If you do not have a Twitter account, it is free to create one at www.Twitter.com.

3. HOW TO ENTER: Entrants may make submissions via Twitter between the hours of 1:00 pm – 1:59 pm ET on Wednesday, October 30, 2013 (“Entry Period”). Enter by actively participating in the party by tweeting during the party, following @thestep2company and @SavingtinyHeart and by using the hashtag #helpsavetinyhearts. To be eligible to win prize(s), Sweepstakes entrants must submit a tweet during the Entry Period using #helpsavetinyhearts hashtag. Sponsor, may disqualify you from the Sweepstakes if it believes in its sole and absolute discretion that your Submission fails to conform to these Official Rules. Date and time can change based on Twitter’s status. If date and time are changed entrants will be notified via Twitter using appropriate hashtag (#helpsavetinyhearts). Sponsor’s clock is the Sweepstakes’ official clock.

4. PRIZES. Five (5) winners will be randomly selected to win the following Step2 items: (1) Handy Helper’s Workbench, (1) Easy Turn Coupe, (1) Glo Buddy Turtle Night Light, (2) Doodle Art Easel during the 59-minute duration of the party on October 30, 2013. Total value of all prizes awarded in this Sweepstakes is approximately $200.00. In addition, Sponsor will randomly select a winner to receive a Thomas the Tank Engine™ Up & Down Roller Coaster™ every time the pledge on this page (http://ironman.kintera.org/faf/donorReg/donorPledge.asp?ievent=1043745&supid=372356254) increases by a $250 increment. Winners must be present and participating in the party using the hashtag #helpsavetinyhearts at the time that they are drawn as a winner. Odds of winning depend on the number of eligible entries received and active tweets during the party. Winner will be notified via Twitter “@” message by @thestep2company during the party on October 30, 2013 and must respond to @thestep2company within 5 minutes of being selected to claim their prize. All Prizes are non-transferable, with no cash redemptions, equivalents or substitutions except at Sponsor’s sole and absolute discretion. All Prize details not specified in these Official Rules will be determined in Sponsor’s sole and absolute discretion. Prize details and availability are subject to change, and in the event that Sponsor is unable to provide a Winner with their Prize, the Sponsor may elect, to provide such Winner with the approximate value of such item in cash or award an alternate prize of comparable or greater value. There is a limit of 1 (one) prize per household during the party. Prizes will be shipped within 2-4 weeks following the end of the Sweepstakes. Prize will not be replaced or replenished if it is lost, stolen, damaged, or destroyed. Winner is responsible for any taxes on prizes awarded.

5. GENERAL CONDITIONS: By participating, each entrant agrees: (a) to abide by these Official Rules and decision of Sponsor, which shall be final and binding in all respects relating to this Sweepstakes; (b) to release, discharge and hold harmless Sponsor, Partner, and their respective parents, affiliates, subsidiaries, and advertising and promotion agencies, and the respective officers, directors, shareholders, employees, agents and representatives of the forgoing (collectively, “Released Parties”) from any and all injuries, liability, losses and damages of any kind to persons, including death, or property resulting, in whole or in part, directly or indirectly, from entrant’s participation in the Sweepstakes or any Sweepstakes-related activity or the acceptance, possession, use or misuse of any awarded prize, including any harm or injury.

6. PERSONAL INFORMATION: Sponsor will not disclose any personally identifiable information. An exception to this is when required to disclose such information by a law enforcement agency or court of law.

7. MISCELLANEOUS: Sponsor is not responsible for lost, late, incomplete, or inaccurate Entries; or for lost, interrupted or unavailable network, server, Internet Service Provider (ISP), website, or other connections, availability or accessibility or miscommunications or failed computer, satellite, telephone or cable transmissions, lines, or technical failure or jumbled, scrambled, delayed, or misdirected transmissions or computer hardware or software malfunctions, failures or difficulties, or other errors or difficulties of any kind whether human, mechanical, electronic, computer, network, typographical, printing or otherwise relating to or in connection with the Sweepstakes, including, without limitation, errors or difficulties which may occur in connection with the administration of the Sweepstakes, the processing or judging of Entries, the announcement of the prizes, or in any Sweepstakes-related materials. Released Parties are also not responsible for any incorrect or inaccurate information, whether caused by site users, tampering, hacking, or by any equipment or programming associated with or utilized in the Sweepstakes. Released Parties are not responsible for injury or damage to any person’s computer related to or resulting from participating in this Sweepstakes or downloading materials from or use of the website. Persons who tamper with or abuse any aspect of the Sweepstakes or website, who act in an unsportsmanlike or disruptive manner or who are in violation of these Official Rules, as solely determined by Sponsor, will be disqualified and all associated Entries will be void. Should any portion of the Sweepstakes be, in Sponsor’s sole opinion, compromised by virus, worms, bugs, non-authorized human intervention or other causes which, in the sole opinion of the Sponsor, corrupt or impair the administration, security, fairness or proper play, or submission of Entries, Sponsor reserves the right at its sole discretion to suspend, modify or terminate the Sweepstakes and, if terminated, at its discretion, select the potential winners from all eligible, non-suspect Entries received prior to action taken using the judging procedure outlined above. CAUTION: ANY ATTEMPT TO DELIBERATELY DAMAGE THE WEBSITE OR UNDERMINE THE LEGITIMATE OPERATION OF THE SWEEPSTAKES MAY BE IN VIOLATION OF CRIMINAL AND CIVIL LAWS AND SHOULD SUCH AN ATTEMPT BE MADE, SPONSOR RESERVES THE RIGHT TO SEEK DAMAGES AND OTHER REMEDIES (INCLUDING ATTORNEYS’ FEES) FROM ANY SUCH INDIVIDUAL TO THE FULLEST EXTENT OF THE LAW, INCLUDING CRIMINAL PROSECUTION.