My 6 year old son, Alex, will tell you he wants to be Batman when he grows up.  He will state this matter of factly, clearly, without humor or apology.  For him, he is presently Batman-in-training.  He is logical, practical and realizes that a 6 year old cannot be Batman.  This makes me the future Batmom I suppose.  The fact that Batman’s parents met an untimely demise, has not escaped me.  But, as a friend told me, it took that tragedy to make Batman who he is.   “Your son,” she wisely said, “has already stated he is Batman (at least in training).  So, no worries.” 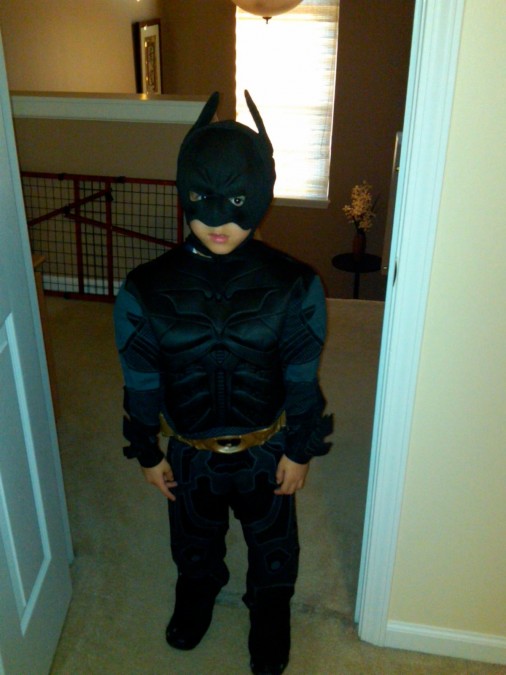 My Batman is not armed with grappling hook, batarangs or a utility belt full of tools.  My Batman is armed with his wit and disarming smile.  A smile that, until recently, was cavity free.

I’ve been taking Alex to the dentist since he was just a little Batman, perhaps two or three.  Every visit has been stellar and I’ve walked away feeling the pride that only a cavity free visit can bring.  I, Batmom, have successfully supervised tooth brushing and flossing.  The reward, no cavities.

This most recent visit started off as usual.  Alex behaved like a champ and the hygienist did her thing.  I smiled.

The dentist came in, looked at Alex’s teeth and nodded.  My smile brightened.  I gathered my belongings ready to exit with another successful visit under my belt.

Then, the bottom began to drop out.  “Well,” the dentist commented “he has a hole in his tooth.”  “See here?”  She said pointing to a spot on his x-ray.

I felt my smile begin to falter.  “A hole?”  I commented slowly.  My mind was spinning with the thought of a hole in a tooth.  What did it mean?  What was wrong with my son?  What had he done to get a hole in his tooth?

And then the dreaded word popped into my head.  Cavity.  Was she talking about a cavity?  She couldn’t be.  Surely she would have said cavity.

My smile fell away.  A cavity?  A cap?  There would be no hiding a cap.  A filling could go undetected by other mothers (yes, I really did think that).  But a cap?  No way.

“Oh.”  I stated as my mind frantically searched for other solutions so that I could hide this growing horror.  And then the solution popped into my head.  “Well, you can make the cap the same color as his other teeth.”  I stated as if this were fact.

“Nope.”  She stated matter-of-factly as she prepared to exit the room.  “The caps are silver for baby teeth.”  She then told me to stop by the front desk to schedule the visit and that she would see me soon.  She waved happily to Alex and exited.

“I’m getting a cap!”  Alex proclaimed as I smiled weakly and ushered him toward the reception area to schedule his visit.  “A silver cap!”

I later shared this story with a good friend.  “I’m pretty sure Batman doesn’t have any caps!”  I lamented miserably.  She smiled and stated, “Well, he does now!”  And we both started to giggle.

Tiffany is the mother of a curly haired six year old boy who wants to be Batman when he grows up! When she is not engaged in an intense light saber battle, watching Transformers (cartoons and movies), asking her child not to jump from the top step or being told, “you’re playing action figures the wrong way, mom” she contemplates how wonderful it would be if her child were a twin or triplet.  Tiffany is the Human Resources Manager for Step2.

What to Do When Your Child Says "Mommy, I'm Bored"

Introducing Your Children to Water Activities