Before having a child, I was never the person who thought I knew a lot about babies.  In fact, I was very afraid of babies and would not hold anyone else’s bundle of joy until they hit the four to six month mark.  It isn’t that I didn’t have an appreciation for their wonderful baby smell or touch but my assumption around their fragility far outweighed any benefit I would get from opening my arms to a precious little one.

I didn’t dive into a lot of research before having my son either.  I figured that my motherly instincts would kick in and common sense would carry me a long way.  Then, my son arrived, and quickly I have learned that common sense and motherly instincts do not outweigh the power of on-the-job training when it comes to being a Mom.  Some of these are rookie moves I’m sure, but I bet there are at least one or two others out there who can relate to this list of lessons I’ve learned over the last ten months (please tell me I’m not alone).

1.    Don’t feed your baby in a moving car
After a particularly long doctor’s appointment (2.5 hours) at an office that was 35 minutes from our home I decided to give my son a bottle.  While you are probably trying to picture this, let me set the stage.  My husband and I were having a Driving Miss Daisy session – him in the driver’s seat and me in the back seat with our son.  About ten minutes into our drive home, he started crying and wouldn’t stop (my son, not my hubby).  I couldn’t bear to hear him cry knowing it was from hunger…so, I got the bottle out of the diaper bag, put it in my shirt to try and warm up the bottle that had been sitting on an ice pack, and then gave it to him.

Luckily, I didn’t give it to him until we were close to our house because he immediately started to spit up.  He was in his car seat and there was no way for me to get him out to keep him from choking.  My husband quickly pulled off the side of the road, ran around the car, and got him out of the seat to pat his pack.  It was dramatic and horrible and could have been avoided completely.

2.    Keep testing different diaper creams until you find one that works
I was very apprehensive about using petroleum based protection for my little guy’s toosh.  I had heard of a very appealing “pink” colored product that works wonders.  So, that is what we used.  At first, it was great, no diaper rash at all.  However, after a few months, a dreaded diaper rash developed.  I continued using the pink stuff.  The diaper rash worsened and got very red (which happened to be muted under the layers of the pink stuff).  I continued to use the pink stuff.  It went on like this for a several weeks with days of relief in between.

Finally, I gave in and used a petroleum based product and he has not had any issues since.  Looking back, I wonder if he had some sort of allergic reaction to the zinc oxide in the “pink” product.  I’m sure it is wonderful for some but I wish I would have switched sooner.

3.    Use the safety belts on your gadgets
OK, so this one is particularly mortifying.  Until our son was about seven months old, he slept in his swing every night.  He was next to impossible to get to sleep and once he would fall asleep, we tip-toed through the house like a cat burglar to keep from waking him.  Strapping him into the swing for safety was not even a consideration.  The swing was deep, he had several heart surgeries and wasn’t wildly mobile (or so we thought), and once he was in the swing, he was asleep for the night…until, the one night he wasn’t.

He had started to cry a little bit and since my husband stays at home with him and I go to work in the mornings, he typically takes care of him overnight.  In this instance though, I 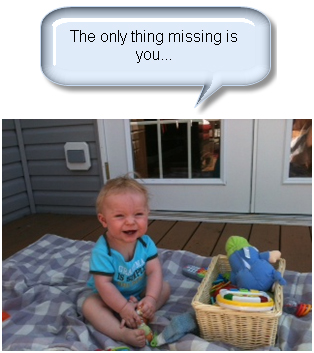 Our baby had flipped himself out of the swing and onto the floor.  Thankfully, his dismount was executed with the style and grace of an Olympic gymnast.  He managed to do a full 360 degree rotation and go from his back in the swing to landing on his butt on the floor.  He only cried for about 15 seconds so I’m sure he was just scared, though not nearly as scared as we were.  In fact, not only do we always use the safety belts on all of his gadgets, he no longer sleeps in the swing.

Now that I’ve shared all some of my Mommy mistakes, and I feel like I definitely should get the “worst parent of the year award” I am reminded of some things I do right.  Like getting the text message below from my husband and deciding it is time to call it a day and head home to my beautiful family!

Tena and her best friend (and hubby) had their first child in July, 2011.  Their little guy has a congenital heart defect and he is one tough little cookie; don’t ever think about calling him sick though – “his plumbing is just different.” Tena is an animal loving vegetarian and is excited to teach her son about compassion and the importance of volunteer work.  She secretly hopes her son will be left handed like his momma. She is the Online Marketing Director for Step2.

Tips for Getting Your Outdoor Step2 Products Ready for Summer Fun