Three years ago, when Alex was in daycare, one of the other mothers commented that she believed her son’s packed lunch had been mixed up with Alex’s lunch.  As a result, each child had consumed the other’s lunch.

When I asked her why she thought the mix up involved Alex’s lunch, she quickly said, “Because I don’t feed my child things from a can.”

I rather dryly replied, “Oh…and clearly you think I do.”  I watched as she shifted uncomfortably and turned from pink to a bright red color.  Usually, I go out of my way to make sure people don’t feel uncomfortable.  However, in this case, I was okay with her discomfort.

She had no idea that I had once taken a Lunchable, removed the packaging and put the cheese, crackers and meat in separate containers to avoid violating the overpriced daycare (I mean child enrichment centers) “no Lunchables” rule.  She didn’t know that I had mentally fist pumped the air because of my cleverness at besting the school.  The idea of her commenting that I would pack a canned item for my child (clearly, I would disguise it in other packaging) was too much!

My mom did an excellent job of always making sure my older brother and I ate healthy meals.  She fed us low-fat and low sugar cereals, made sandwiches on wheat bread and had us drink two percent milk long before these items were in vogue.  She chose Jif, because hey, that’s what “choosy mom’s” chose.  Actually, Jif was about the only brand named item she purchased but that’s a story for another day (the tagline swayed her).  She always made sure dinners were balanced.  We didn’t really know what dessert was.

I do my best, but my cooking skills are somewhat limited.  It’s not that I can’t cook because, as my mom says, anyone who can read can follow a recipe and cook.  It’s just that I’ve chosen not to build my skill set in this area.

I live vicariously through cooking shows.  Alex enjoys watching them with me (Hell’s Kitchen and MasterChef are favorites – I think he likes Gordon Ramsay’s charm). 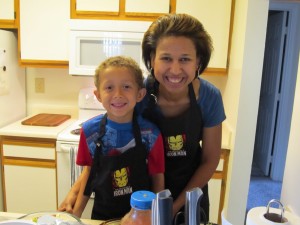 As a result, I could successfully fool you into thinking I could cook and was a “foodie.”  My “training” has taught me how to toss around expressions like “flavor profiles,” comment on the “sear” of meat, and remark on “knife work” with the best of them!

Lest my son be deprived of experiencing different foods, when we dine out we play a game called “taste test” based off of the popular “Hell’s Kitchen” challenge.  I have Alex shut his eyes and then feed him something.  He then has to guess what it is.  By playing this, I have been able to get him to try many foods that kids typically shy away from.

Once he has tried something, I’ll buy it and we’ll try cooking it at home.  Cooking together has become “our thing” and we have cool Iron Man “chefs” aprons.

A few days ago, Alex and I made perfectly seasoned and cooked Tilapia (nice crunchy crust), steamed broccoli with a light cheese sauce and a stunning rice.

Tiffany is the mother of a curly haired six year old boy who wants to be Batman when he grows up! When she is not engaged in an intense light saber battle, watching Transformers (cartoons and movies), asking her child not to jump from the top step or being told, “you’re playing action figures the wrong way, mom” she contemplates how wonderful it would be if her child were a twin or triplet.  Tiffany is the Human Resources Manager for Step2.

Family Fun for the Olympics: London 2012