A mom shares the emotional growth of her six year old

I’ve never really found the words empathetic or emotive as words that describe my six year old son Alex. Caring, kind, funny, charismatic and observant are all great descriptors of my curly-haired boy. Empathetic and emotionally expressive, well, maybe not so much.

Alex has always been very practical and logical. When he was born, he wouldn’t cry and this was concerning to the physicians as they needed him to cry to clear his lungs. He eventually did (on his own timeline). However, it was almost as if he waited because he didn’t see the point of crying when he wasn’t upset.

A couple of years ago, I asked Alex to snuggle with me as we watched television. Knowing that he would be reluctant, I told him I was cold and he could keep me warm. He considered my request, scooted down next to me on the couch, snuggled for a few minutes and then promptly stated “you’re warm enough now” and returned to his former spot.

He has never been the type of child to be overly affectionate or empathetic. For example, if I’m ill, he’s likely to say, “Mom, you should go to the doctor” and this response will only be triggered after I complain of a cough, sore throat, cold, etc. It’s not that his responses are inappropriate. They just aren’t overly empathetic. Having been around young nieces who were very expressive, I think I have a tendency to expect this from Alex. I’ve kept my fingers crossed that he would grow into his inner empath. And, I think he finally is (again, on his own timeline).

Recently, Alex and his friend were playing with their toys guns. As they prepared to go outside, I overheard his friend say, “I don’t want to take my gun outside.” I heard Alex reply, “that’s ok, I’ll cover you.” I found his response quite funny at first and then I realized that he was looking after his friend through their imaginative play.

About a month ago, we had to put our German Shepherd, Ember, down. The news of her illness was a surprise and it was less than two weeks from the time that I learned something was wrong until her final ultrasound showed that she had a very aggressive form of cancer; the kindest thing to do was put her down. I wasn’t sure how Alex would take the news.

As I explained that Em was sick and wouldn’t get better, he listened attentively. Knowing that she would likely be put down that day, I told Alex that she probably would not be home when he came home from school. I explained that she was going to die soon and I was going to take her to the vet. I suggested that he say goodbye to her and tell her what a good dog she had been. He didn’t respond and just watched me. I asked him if he understood and he said “yes” and then motioned with his hand to wave me out of the room so that he could be alone with the dog.

I’ll never know what he said to her in their moments alone. If he patted her on the head, gave her a hug or just looked at her. But, he clearly wanted a mom-free moment with her and knowing this, I didn’t ask him about the time they shared. 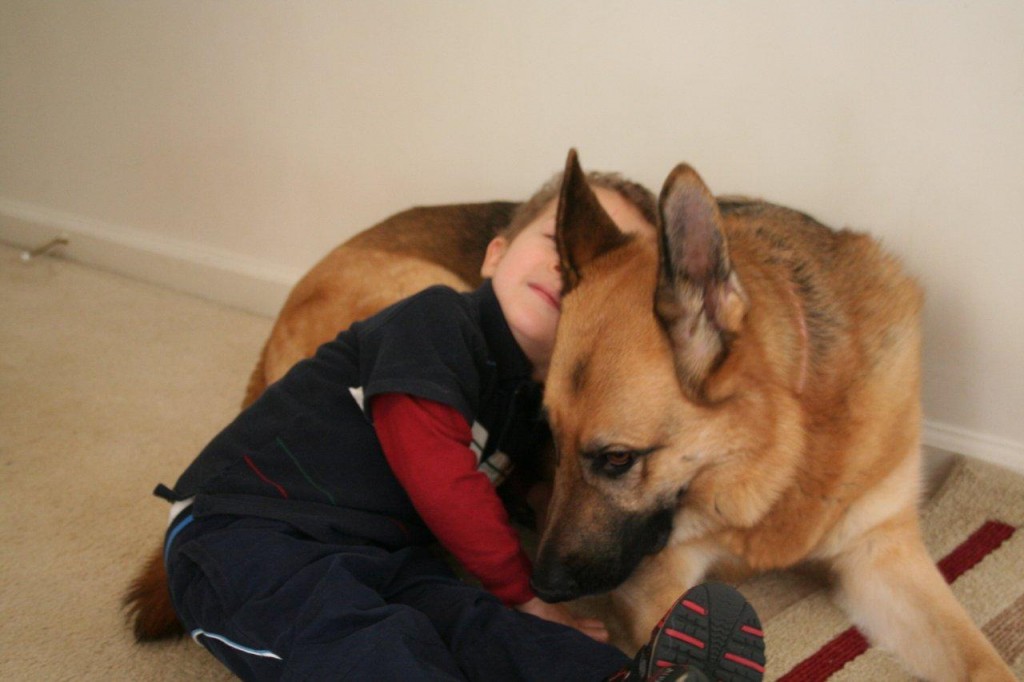 A couple of weeks passed without him initiating any conversation about her. One day he brought home a paper where he had to complete a thought. The sentence started with, “I wish.” Alex finished the thought by adding, “that I had a dog.” While saddened, it warmed my heart to know that he did think of her and that he had expressed that thought in writing according to his own timeline.

Tiffany is the mother of a curly haired six year old boy who wants to be Batman when he grows up! When she is not engaged in an intense light saber battle, watching Transformers (cartoons and movies), asking her child not to jump from the top step or being told, “you’re playing action figures the wrong way, mom” she contemplates how wonderful it would be if her child were a twin or triplet. Tiffany is the Human Resources Manager for Step2.

Dedication to the New-Age Grandparents