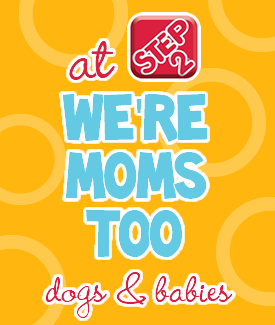 I firmly believe my yellow lab Peak knew I was pregnant before anyone else. Before I even saw that plus sign, Peak had already edited his behavior. His typical jumping upon my arrival home from work came to a halt and he’d lay his head on my belly when we I slept. This lasted the entirety of my pregnancy (and to this day his puppy tendencies are finally gone!).

You might think we’re crazy, but my husband and I often refer to Peak as our first born. Knowing that not all dogs mesh well with babies, we feared how he would react when our new roommate arrived home. I asked my OB GYN multiple times how I could prepare the dog for the new baby. I also asked friends with pets and kids. The best advice I received was to have someone bring our new daughter’s little hat home to Peak before bringing her home. 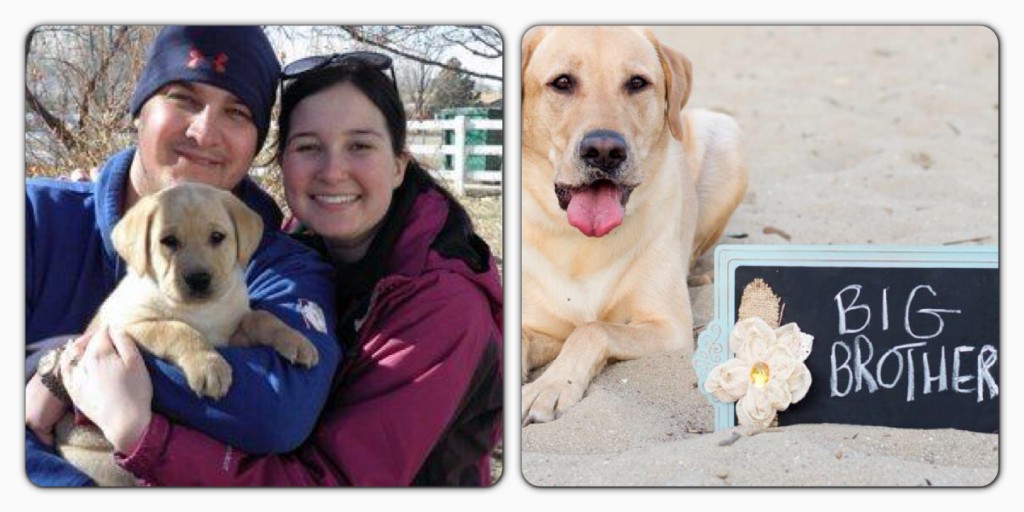 My best friend of 20 years took my daughter’s little newborn hat to our house the day she was born. When she walked in, she let Peak sniff it. You see, Peak has an addiction to anything fabric – he is constantly stealing socks – so this was a brave move. Anyone who knows me has heard countless stories of where we’ve found socks in the house – post digested. So when Jackie showed him the small fabric hat, she assumed he would steal it and run off with it, only to be seen again a few hours later on the floor in the corner of our bedroom. Rather, she was stunned by his reaction. She told me that after she placed the hat on the kitchen floor, he gently walked over to it, sniffed it, and left it there.

This made me feel better about their upcoming meeting. To me, this said, “I smell Mom. That thing must finally be here. I guess I’ll give this big brother thing a shot.”

Our daughter met Peak at 4 days old. I was first to enter the house. My husband is the alpha in the dog’s eyes, so he waited to come into the house after me as to show Peak that we are equals. I walked in and Peak immediately put his nose to my belly. He looked up at me with his tail wagging as to say, “Okay lady. Where is it?” I then brought her in in her car seat carrier. I placed the carrier on the ground and let them “meet.” Of course I was scared that he would hurt her, but by letting him sniff and “get to know” her, it showed him that she is an extension of us.

We actually captured this meeting on video.

The first few nights she was home from the hospital, he would wake up with us when she cried for her nighttime feed. He would sit on the nursery floor as we tended to her. But just like any sibling, the crying got old to him and by the forth night home, when she cried he would lift his head up in the bed turn to my husband and me as to say “Again?!” and then lay his head back down.

Fast forward six months. He’s always giving her kisses and now that she is starting to grasp things, she “pets” him. Of course there have been some parent fails, like the time he dropped his toy on her forehead and left a little red mark above her eyebrows. I get it. He just wanted to share his toy with her. 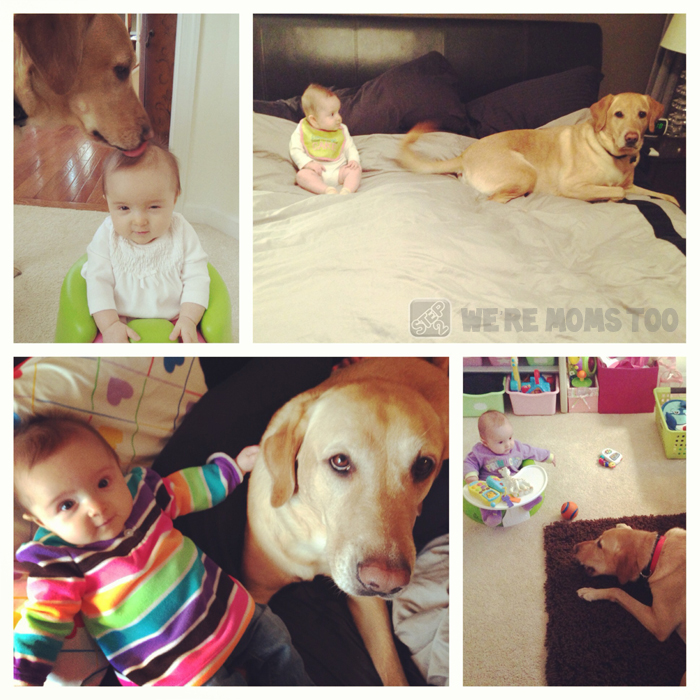 We are so lucky to have a pet that is good with kids. I know not everyone is this lucky, but we had to make a conscious effort with the introduction so everyone could learn how to play nice. Their meeting was truly one introduction that made a lasting first impression on all of us.

About Ashley
Ashley is a self-proclaimed fashionista, social media maven, and proud new mama. Together with her husband, they welcomed their first child last August. They also have a fur-baby named Peak, an 80-lb. yellow lab whom they adopted during a ski trip in Denver. She is the Social Media Manager at Step2 and you may have recently communicated with her if you’ve chatted with Step2 on Facebook or Twitter.

We’re Moms Too is Back with a New Contributor