Two weeks ago on Family Night at FirstEnergy Stadium in Cleveland, Ohio, five-year-old Ryan Encinas ran down the football field to score the winning touchdown for the Cleveland Browns. When Ryan was just two years old, a tumor was discovered on his left lung. He spent six weeks in the hospital undergoing chemotherapy and radiation treatments. Thankfully, Ryan beat the cancer through the treatments and celebrated his cancer being in remission for two years on August 2nd. 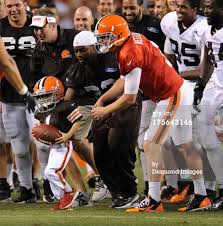 The non-profit organization Littlest Heroes selected Ryan to be a Browns player that Saturday night. The football players and crowd of 24,131 people cheered him on as he ran 40 yards to complete the touchdown.

This Thoughtful Thursday, we honor Ryan for his bravery and showing us that no matter the situation, anyone can be a winner.